DENVER — As Mercedes-Benz transforms itself into an all-electric car company, as so many automakers are doing, the first fruits of its mainstream EV generation have proven to be tasty. We’ve already sampled various flavors of its EQS Sedan, and had drives in the smaller EQE Sedan. These comfy-cozy cruisers are a pleasure to ride and drive in, with their eager electric powertrains, flashy technology and fortress-of-solitude interiors. But SUVs are what the market really wants. The first from Mercedes is the EQS SUV, the electric answer to the GLS-Class in the same way that the EQS and EQE Sedans are to the S- and E-Class, respectively. And much like the EQE resembles the EQS that came before it, the EQS SUV promises to feel familiar to those who’ve already sampled from the EQ punchbowl, and perhaps entirely alien to those who haven’t.

The EQS SUV doesn’t cut quite the imposing figure as the GLS. It’s smaller, with softer angles. The lighting on the EQS makes it look and feel particularly special. We especially like the gently arcing lightbar that stretches across the liftgate to visually connect the taillights. Up front, there’s a three-pointed star upon a glossy grille insert below a pair of headlights connected by another light bar. Depending on the model, that big Mercedes emblem is illuminated, and shines proudly.

Inside, the EQS SUV feels grander than its exterior, while still being more compact than the GLS. If you’ve been inside the EQS Sedan (or at least seen it), its SUV sibling will seem mighty familiar, though with more upright seating positions. The dash looks nearly identical, dominated by screens — either the giant three-unit Hyperscreen or a digital instrument cluster and a large central unit shared with the S-Class. We counted six USB-C ports up front, with another four in the second row and two more in the third. That’s right, 12 USB ports. 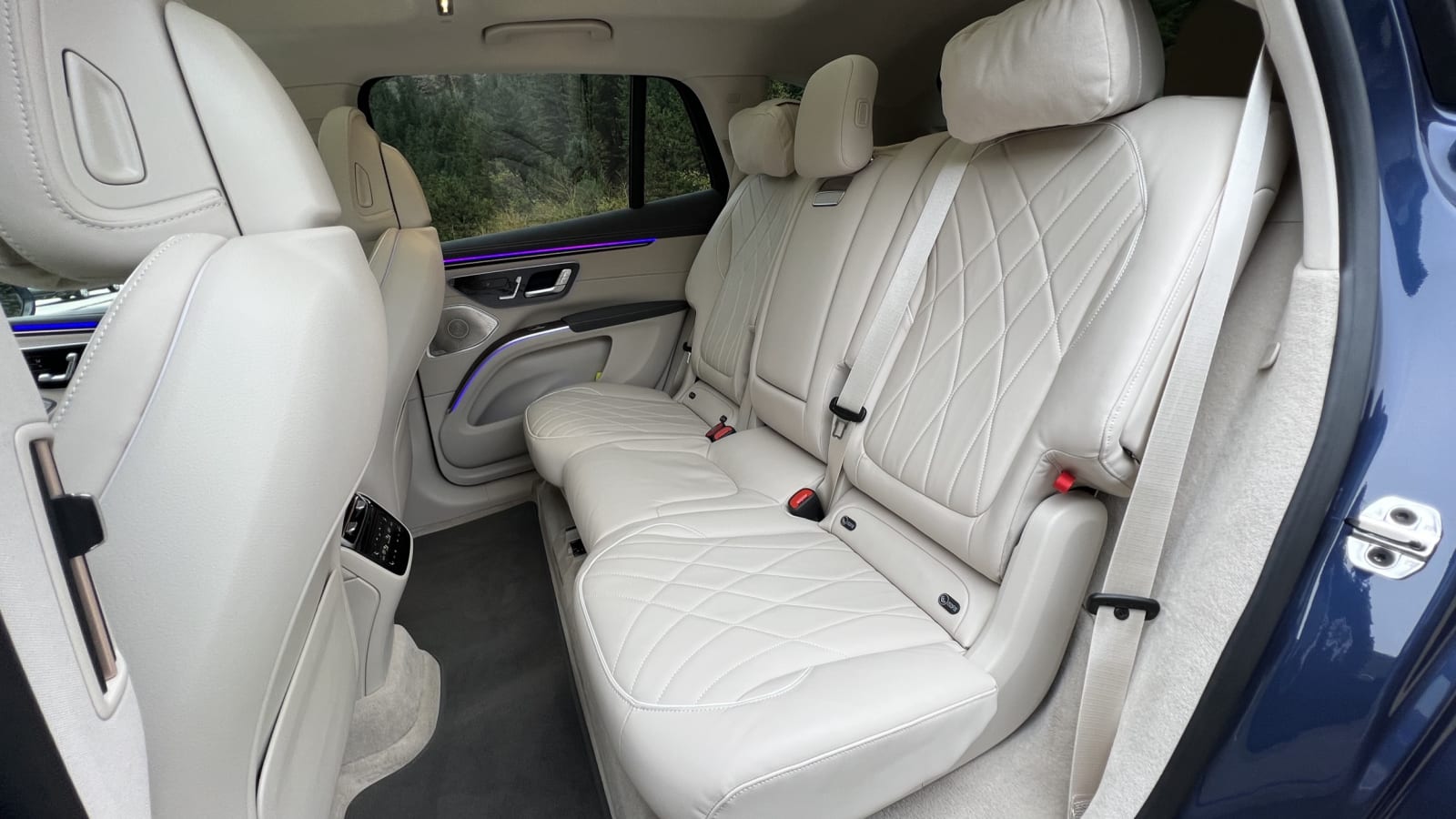 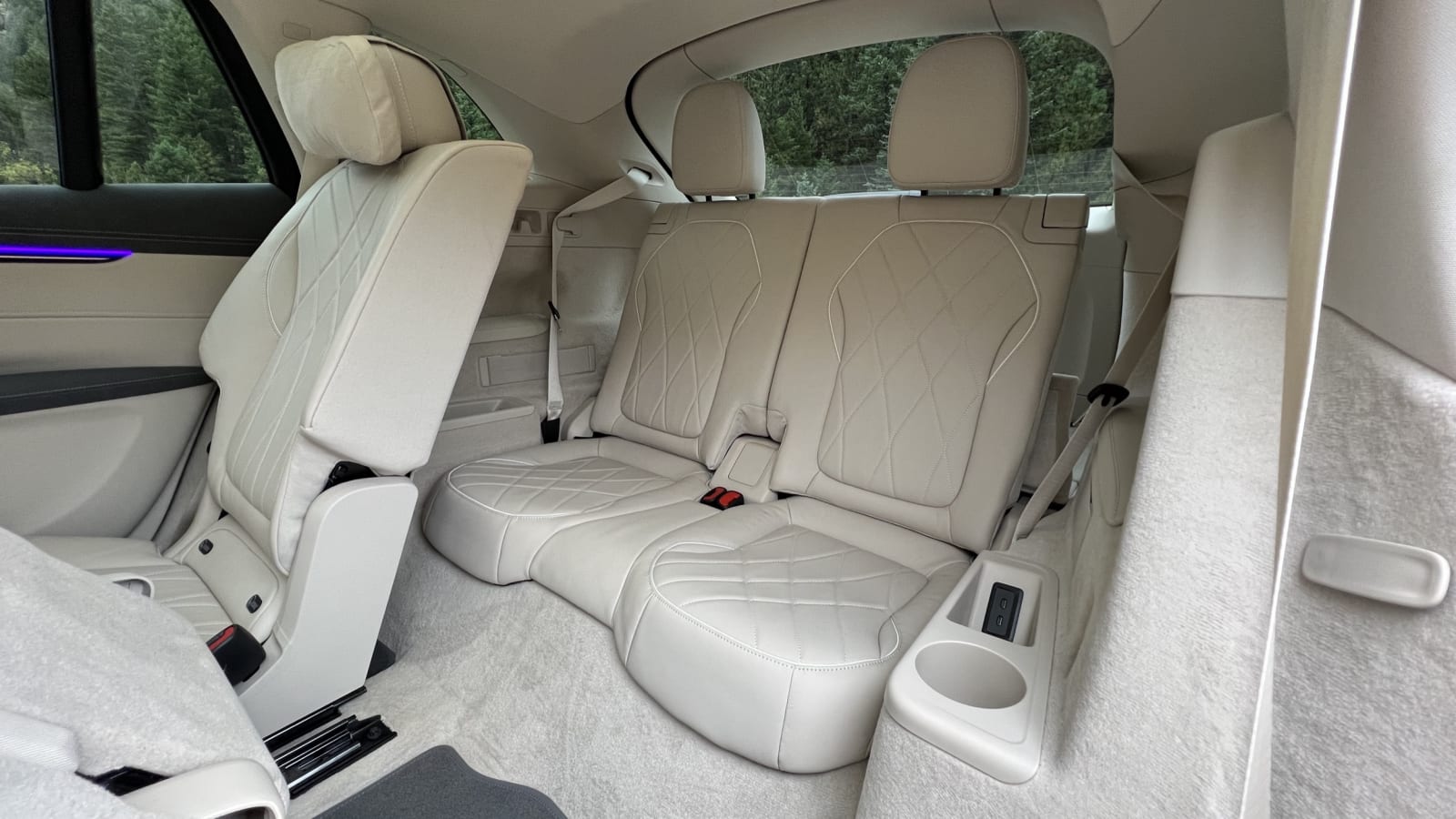 There are even more screens, too.

With the box ticked for the optional rear-seat entertainment system, each outboard second-row passenger can enjoy their own screens with many of the same infotainment functions as up front, including navigation, audio controls, games and apps. The center armrest that folds down can also be equipped with a removable tablet (part of the Executive Rear Seat Package) with more redundant infotainment functions.

The two third-row seats would be tight for an adult, but the second-row seats can lean forward to provide more room, and their seat cushions are high enough to slide your feet beneath them. The headroom seems more appropriate for children, but an adult could survive back there for a trip across town. They’ll have to make due without their own screens, but then again there’s always the two USB ports and that removable tablet from row two.

The EQS SUV can be had with three different powertrains. Regardless of motor configuration, the EQS SUV has a 107.8-kilowatt-hour battery pack that can be charged in 12.5 hours on a Level 2 charger, or from 10-80% in 31 minutes at. The 450+ features a single electric motor at the rear axle, producing 335 horsepower and 419 pound-feet of torque. Mercedes claims a 0-60 time of 6.5 seconds for the EQS 450+. This is also the longest-range option, going 305 miles on a charge, despite having the lowest starting price, at $105,550 (including destination).

Out on the road, the EQS 450 4Matic SUV sails away from stops swiftly and quietly. Despite peak torque being available right from the get-go, the accelerator is easily modulated — passengers won’t be taken off guard by the acceleration unless you want them to be. When driven calmly, its accelerative glide is similar to any other quiet SUV without palpable gear shifts. Things only get interesting when you turn the wheel. Thanks to the standard rear-axle steering, which pivots the rear wheels by as much as 10 degrees, the EQS is quick to respond to inputs from the helm. The more steering angle you dial in, especially at slow speeds, the more surprising the outcome. An SUV this big shouldn’t be able to maneuver so tightly. At higher speeds, the rear wheels work with the front to make for buttery smooth lane changes.

Stepping up into the 580, gentle acceleration is just as easily accomplished, but you also have the option to swat occupants back into their seats with a full boot of the right pedal. It’s useful for getting up to highway speed, passing a slower vehicle or pushing out of a turn in the mountains, but once the novelty wore off, we didn’t regularly make full use of the accelerator’s full length of travel. Later, we didn’t exactly miss that extra oomph when stepping back in to the 450, but a further stint in the 580 had us thinking that, so long as we were already spending more than $100,000 to get into the EQS, we’d probably stake the coin for the extra power.

Regardless of trim, the EQS SUV has a pair of paddles on the back of the steering wheel to adjust the levels of regenerative braking. There are four regen settings, including D (standard), D- (strong), D+ (full coasting) and an D Auto setting. That last is an “intelligent” setting that uses data from the vehicle’s safety systems and GPS navigation to automatically decide when and how much regen to use to maximize your driving range. We preferred to have direct control over the amount of regen, usually leaving it in normal mode, or in higher regen when traveling downhill. The strong regen mode, though, does make the brake pedal behave oddly, depressing it on its own to match the input you’d otherwise have to feed it. Stepping on a pedal that’s already partway depressed feels unnatural, but as a tradeoff, you simply don’t have to touch the pedal as often.

We generally appreciated the peace and quiet that the electric powertrain and serene cabin afford, but if you’re the type of driver who needs a little aural excitement to correspond to the car’s motive forces, there are a trio of sound experiences. The first is called “Silver Waves,” and it’s the most internal-combustion-sounding of the three. The second, “Vivid Flux,” is more akin to the typical harmonious spaceship whine a lot of EVs pair with their powertrain. Either of those are acceptable sounds to help augment the driving experience. The third, “Roaring Pulse,” sounds like an angry, weird dragon. While an incongruent noise to pair with the acceleration of an electric luxury vehicle, we kept selecting it for the sheer hilarity. 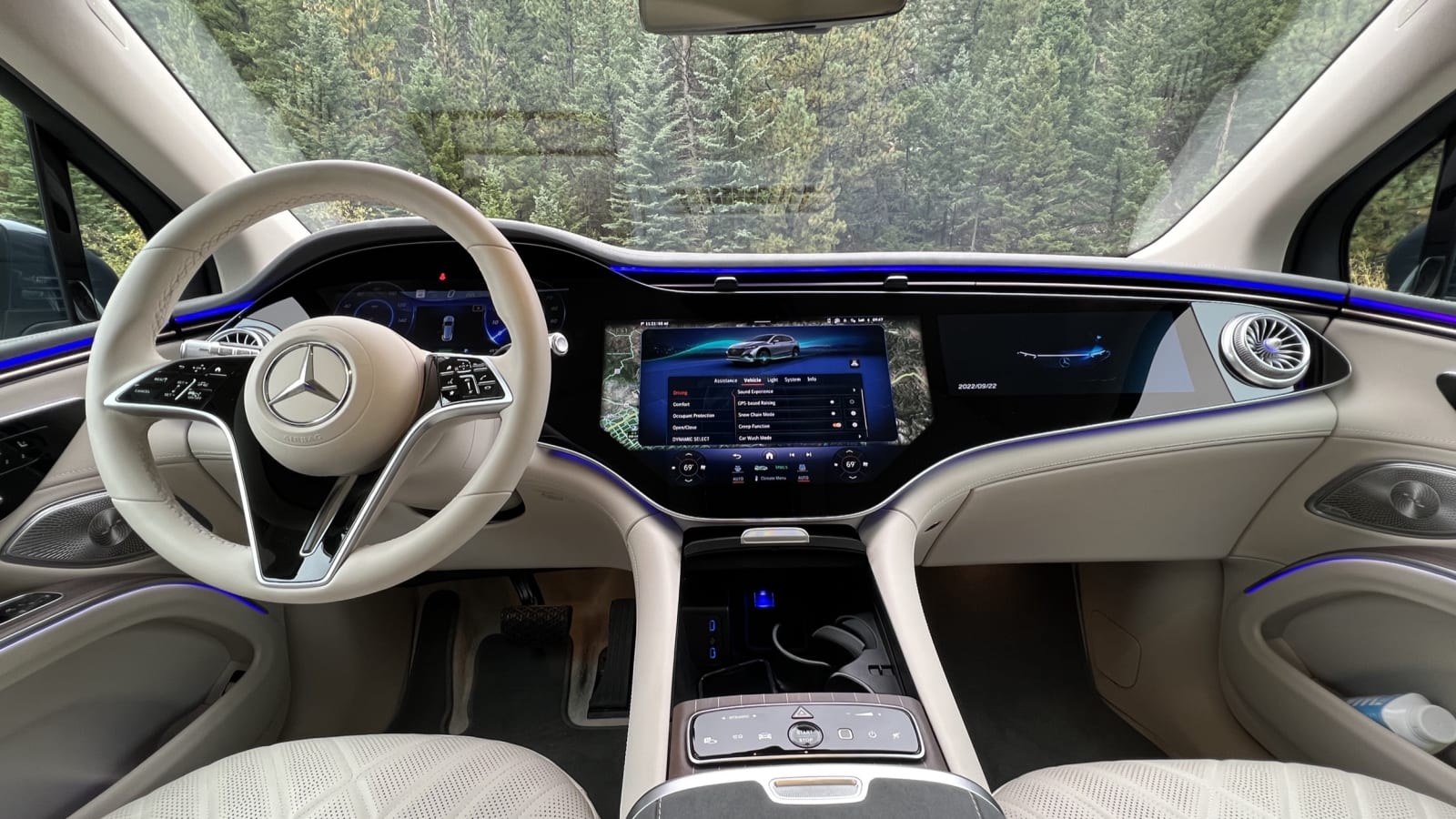 Optional in the 450 and standard in the 580 is the flashy MBUX Hyperscreen. This includes three screens in one continuous, curved piece of glass that stretches the entire 56 inches across the dash, from pillar to pillar. It includes a 12.3-inch digital instrument panel in front of the driver, a 17.7-inch central touchscreen, plus a 12.3-inch touchscreen display on the passenger side. It’s the same unit we’ve already seen in the EQS Sedan, and it’s just as impressive and potentially overwhelming in the SUV. It’s bright, crisp and full of information. It’s this interface, and not the electric powertrain, that has given the EQ lineup such a steep learning curve in terms of operation. Now sampling our third Mercedes EQ, we think we’re getting the hang of it.

Mercedes has programmed its range-topping infotainment screen with what it calls “Zero Layer” design, which uses artificial intelligence to predict what information or application you need, and put it on the screen when you need it. For instance, it’ll bring up your next turn from the navigation menu, or if you tend to turn on the heated steering wheel in conjunction with some temperature, time or other behavior, it will know to present this on the screen when you’re most likely to need it. Our tester didn’t have enough time with us to figure out we had no desire to use the “Energizing Comfort “programs (which combine audio, lighting, fragrance and seat kinetics to help relax or revitalize you) when driving a twisty mountain road in the rain, though the Power Nap program sounds like a great idea during a charging session.

If equipped with a head-up display, the augmented reality tech helps you to know exactly where and when to turn with a series of arrows that point out your next move. Whether or not a HUD is equipped, the navigation will also show you the same “augmented video” information on the central infotainment screen. You have to take your eyes off the road in that case, but those arrows are superimposed over a camera feed from the front of the vehicle, and even highlight which lane you need to be in. Both of these features were helpful in navigating the unfamiliar streets of Denver, as well as complicated intersections or highway interchanges. One or both can also be turned off. 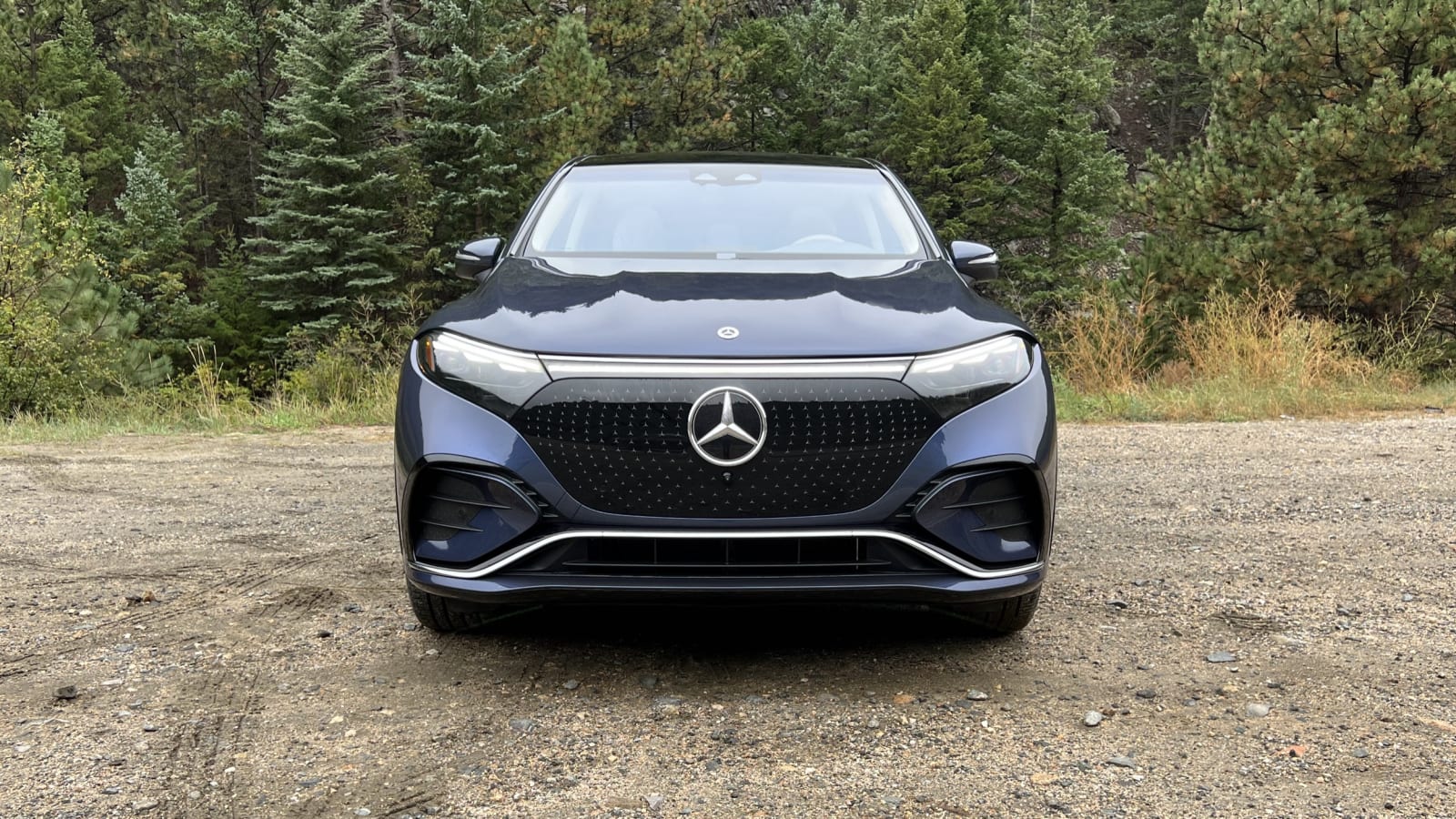 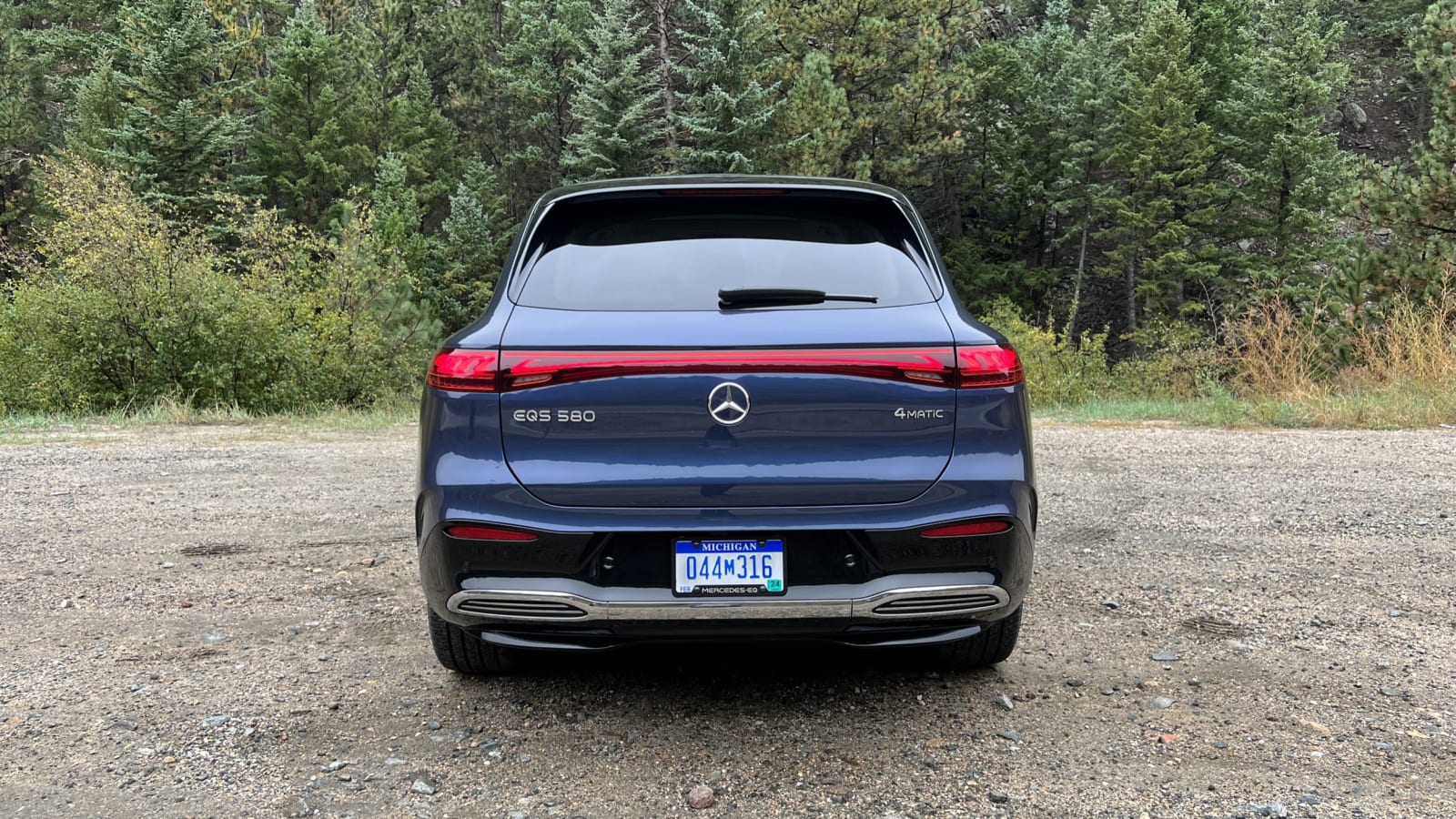 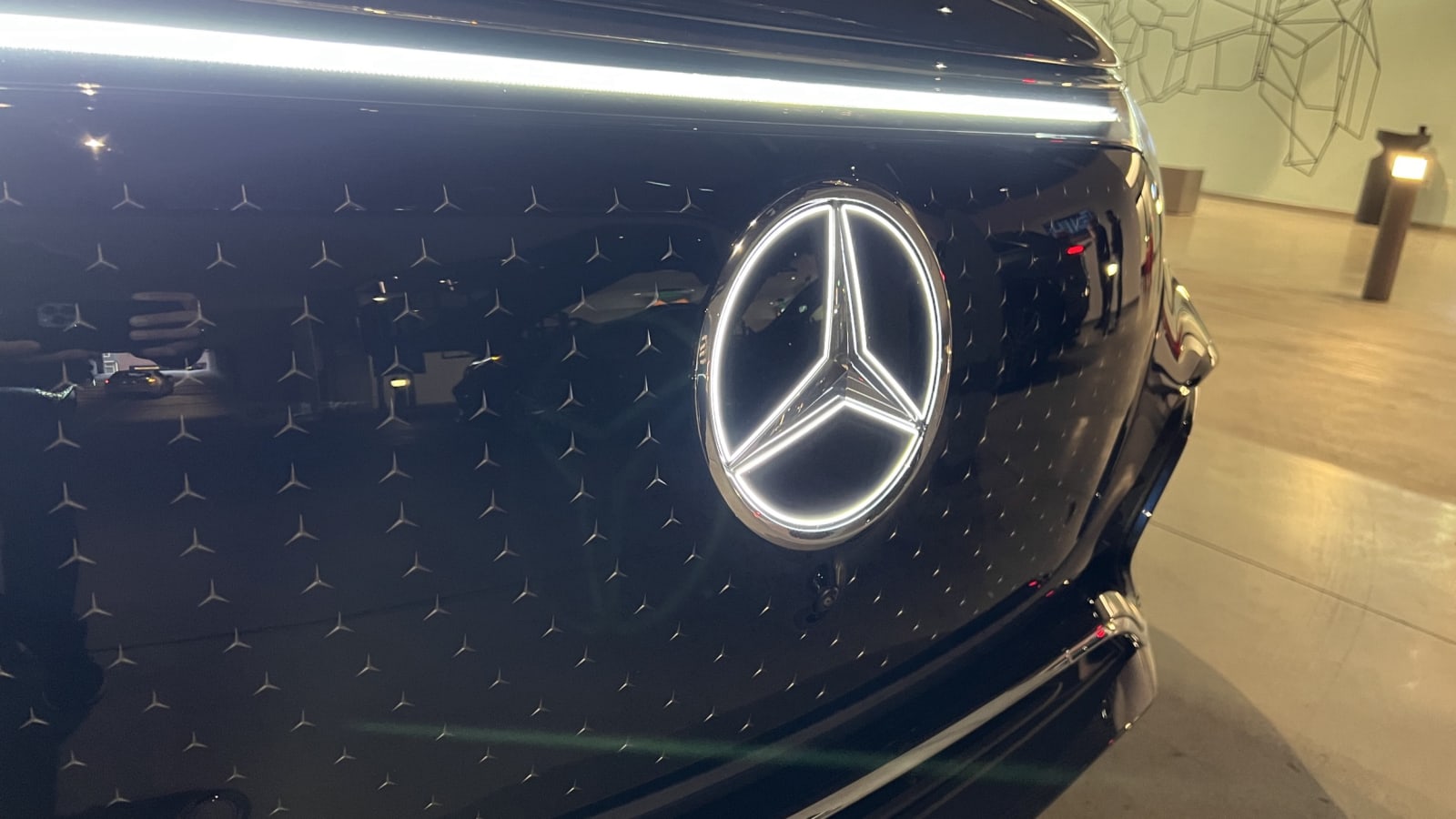 We don’t expect many owners to take their EQS SUV off-roading in the Rockies, but it’s always a nice boost of confidence to know what your ute is capable of. Who knows when you’ll take a wrong turn at the campground and end up on an unmaintained logging road, right? After a morning of drizzly driving, we found our way to one such place, an area popular with ATV tours in the mountains of Clear Creek County.

Turns out off-roading a six-digit electric SUV is actually a pleasant experience we wouldn’t mind repeating, as absurd as it sounds. The quietude is nice, as there’s nothing to hear but your natural surroundings and the interaction between tire and trail. It’s comfortable — for one thing, you’re sitting in a luxury SUV, perhaps getting a massage, but also the suspension keeps the ride from being too jarring. It’s capable, traversing up wet, rocky trails and muddy ruts with relative ease, all without strange pulsings and clickings from the stability control as the car figures out where to send torque. The multiple camera views, including one that appears to make the hood transparent to show what’s directly beneath it, help you stay on track when you can’t see the trail ahead through the windshield. The most impressive feature, though, is the rear-axle steering, as it allows you to slink tightly around trees and boulders — obstacles that would normally require a three-or-more-point turn — with surprising deftness.

But the EQS SUV will spend most of its time on pavement, shuttling kids to soccer games on suburban roads, hitting the highway for trips to the city and maneuvering through parking lots that feel increasingly smaller as family vehicles become increasingly larger. Here, it might stand out for its newness and “hey, nice car” magnetism, but it will otherwise fit right in. It’ll make itself comfortable (as well as its occupants) as it dexterously slurps up speed bumps and slides into narrow parking slots. And, soon enough, that unfamiliarity with the tech will wear off about as quickly as the novelty of owning the first EQS SUV in the neighborhood, because, while you may be the first, you absolutely won’t be the last. 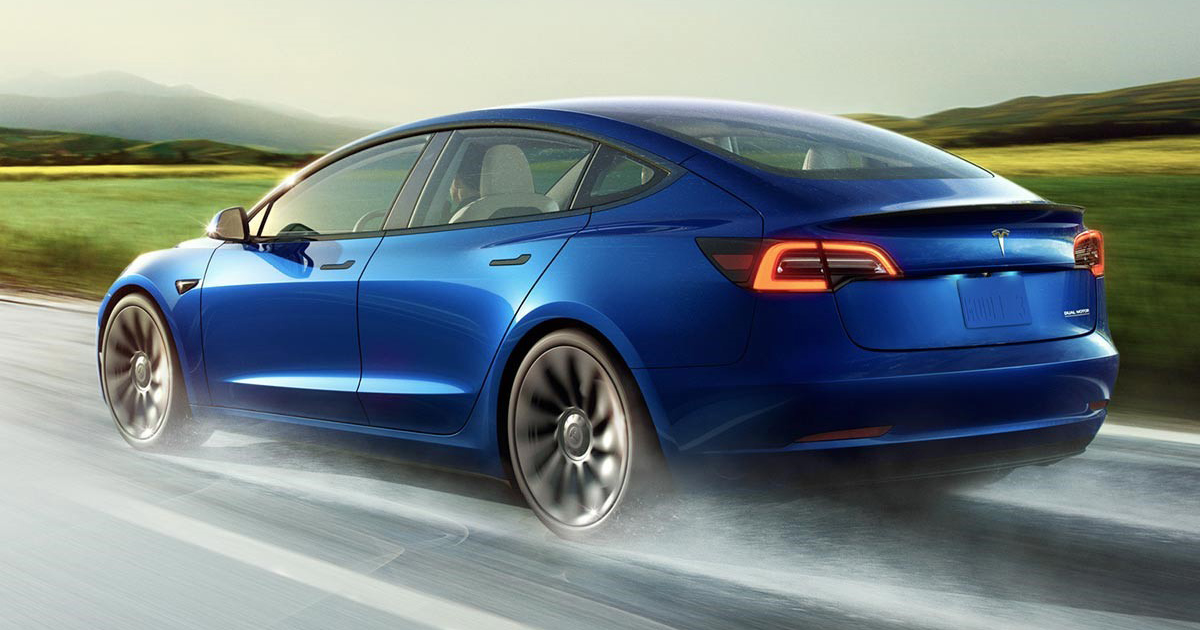 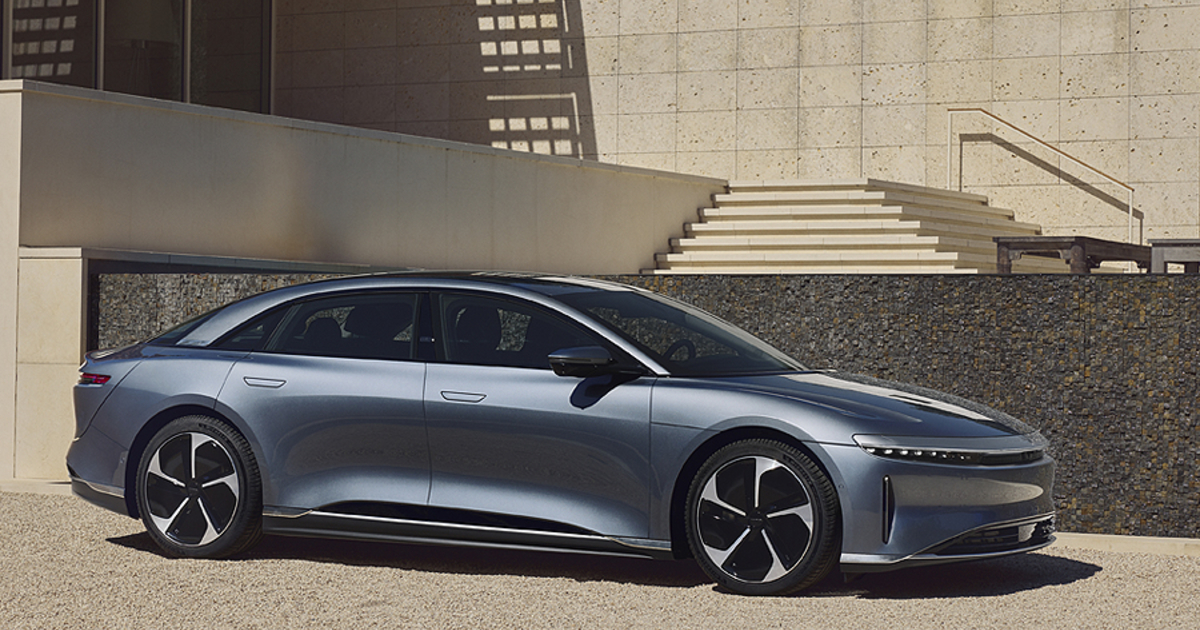 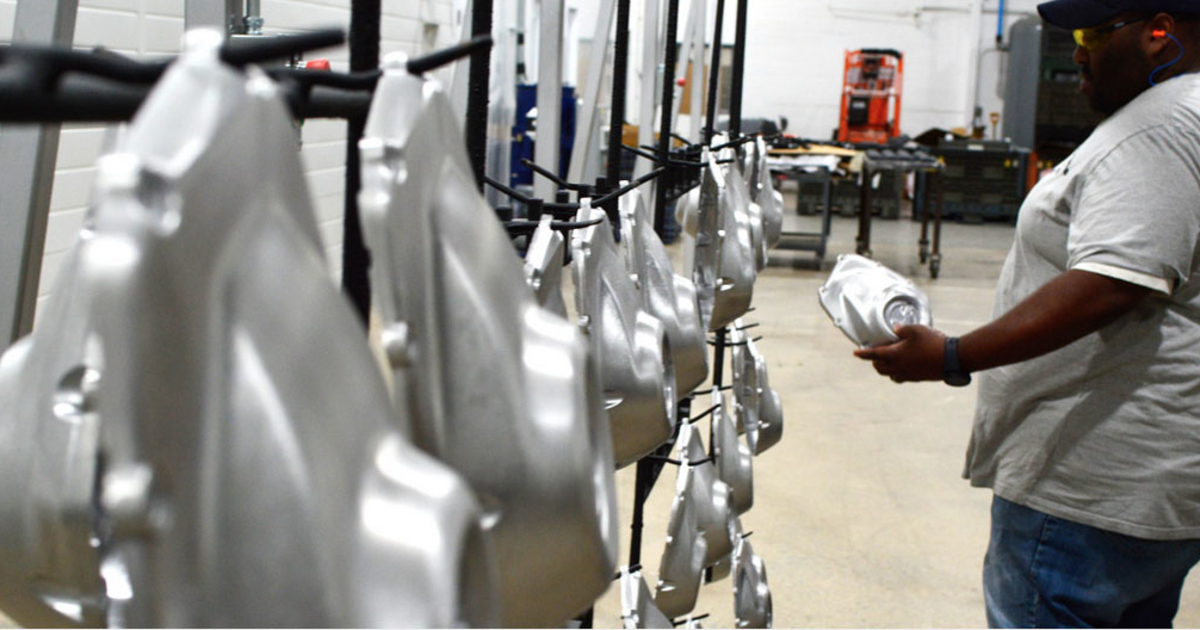 Supplier to close plants, lay off 244 in Michigan 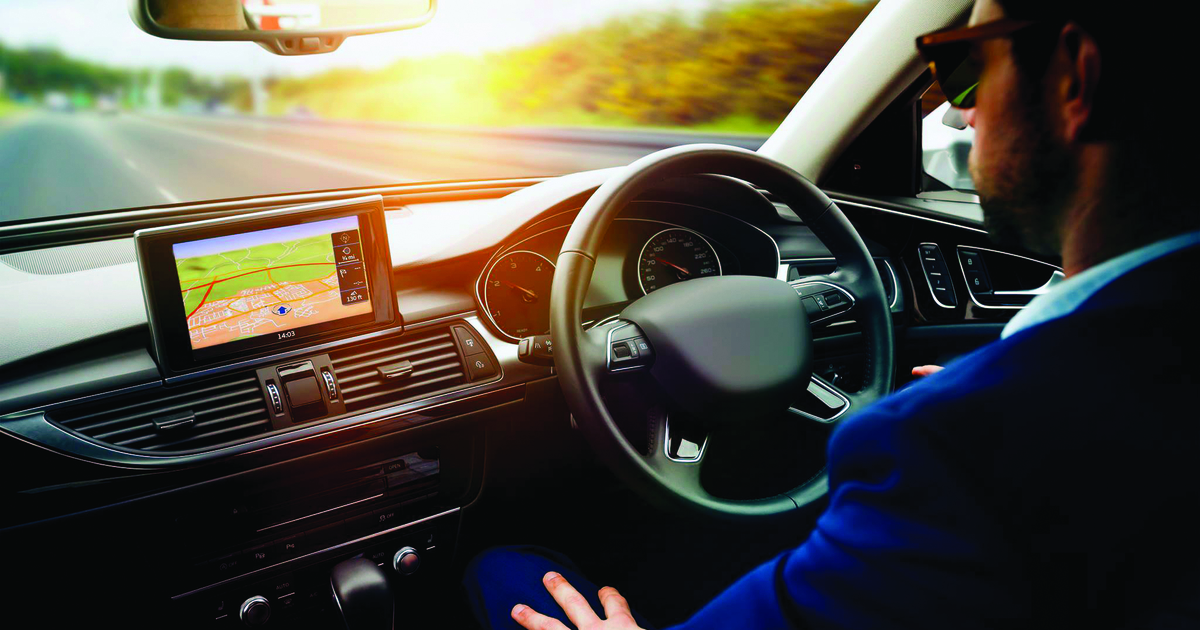 The Betrayal of Linda Slaten
45 mins ago

Dori: I can appreciate government work every once in awhile
56 mins ago