In an historic political earthquake, the female ‘teal’ independents, funded by multimillionaire Simon Holmes a Court, are outpolling sitting Liberal MPs in wealthy suburbs near the city or by the beach – ending the careers of leading party moderates.

Treasurer Josh Frydenberg, the Liberal Party’s deputy leader touted as a future potential leader, is behind in his Melbourne seat of Kooyong, along with Tim Wilson in nearby Goldstein and Dave Sharma’s in the Sydney eastern suburbs seat of Wentworth.

‘There are still thousands of postal votes to count.’

The Liberal Party is also behind in the wealthy Perth seat of Curtin against a climate independent and looks set to lose the Brisbane seat of Ryan to the Greens, as the minor party leads on primary votes in the Labor seat of Griffith.

Liberal Party scalps who lost to independent or Green

DAVE SHARMA in Wentworth in Sydney’s east to Allegra Spender

CELIA HAMMOND in Curtin in Perth to Kate Chaney

Teal candidates are set to pick up two seats previously held by a Liberal prime minister, and keep another.

Female independents have beaten male MPs, with the Liberal Party having far fewer women in Parliament than Labor.

Mr Holmes a Court, the money behind the Climate 200 campaign independents, had a go at the moderate Liberal MPs who lost their seats.

‘The community have seen through the fake moderates,’ he told the ABC, adding he was a ‘minority funder’ of the campaigns.

Mr Frydenberg looks set to lose Kooyong, in Melbourne’s east to independent Monique Ryan after suffering a 10.7 per cent swing against him.

‘To the people of Australia, we say thank you,’ he said.

‘Thank you for giving me the privilege of being the Treasurer.’

Dr Ryan, a paediatric neurosurgeon, is leading 54.2 per cent to 45.8 per cent, after preferences.

Mr Frydenberg and Dr Ryan were each tied at 41.6 per cent of the primary vote but the independent is set to benefit from Labor and Greens preferences.

In Sydney’s wealthy eastern suburbs, Allegra Spender is set to knock off Liberal MP Dave Sharma, a former ambassador to Israel, in Wentworth, once held by another former PM Malcolm Turnbull and opposition leader John Hewson.

The daughter of the late fashion designer Carla Zampatti is leading 53.7 per cent to  46.3 per cent, after preferences. 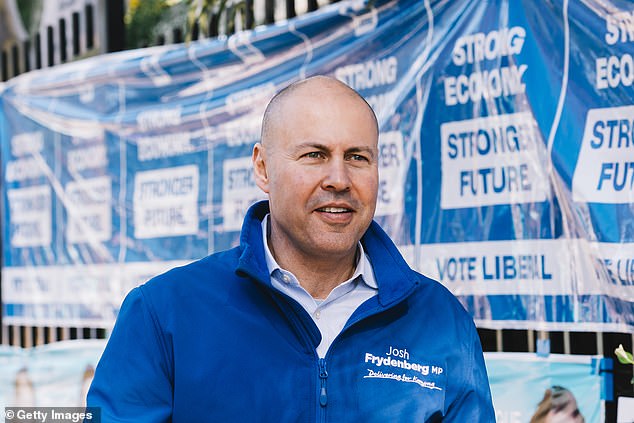 Her primary vote of 38.8 per cent is ahead of her Liberal opponent’s 37 per cent.

The campaigner for climate action is the daughter of former federal Liberal MP John Spender – who himself lost to an independent Ted Mack in 1990 – and the granddaughter of post-war minister for external affairs Percy Spender.

Sharma won back Wentworth at the 2019 election after losing a 2018 by-election to another high-profile independent, former Australian Medical Association president Dr Kerryn Phelps.

‘What we have achieved here is extraordinary,’ Ms Daniel told supporters.

Mr Wilson, a campaigner for marriage equality, had a primary vote of 37.9 per cent to his opponent’s 35 per cent. 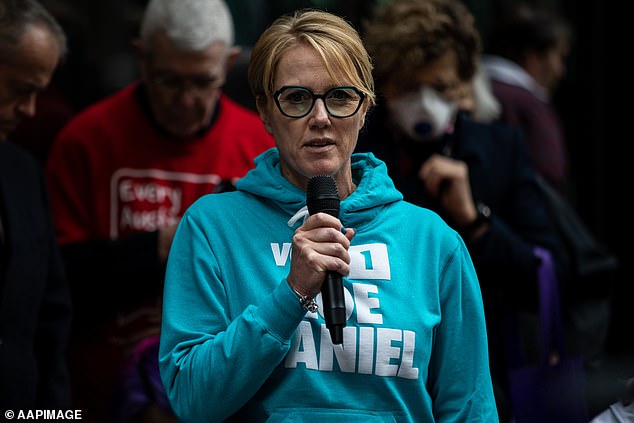 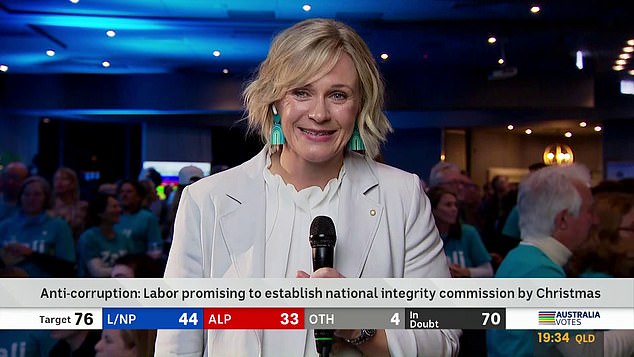 In the neighbouring electorate of North Sydney, Liberal incumbent Trent Zimmerman has lost, with independent Kylea Tink ahead 55.7 per cent to 44.3 per cent after preferences.

Mr Zimmerman had a 13.4 per cent swing against him on preferences, leaving him with a primary vote of 36.3 per cent.

The Liberal Party is also in trouble in the Sydney Northern Beaches seat of Mackellar, stretching from Dee Why to Palm Beach. 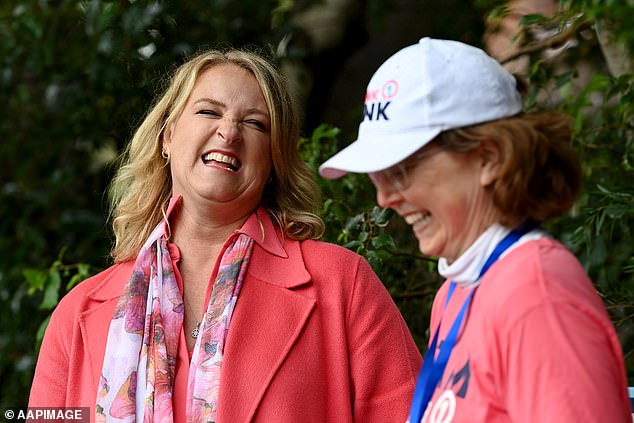 In the neighbouring electorate of North Sydney, Liberal incumbent Trent Zimmerman has lost, with independent Kylea Tink (pictured) ahead 55.7 per cent to 44.3 per cent after preferences

Independent Sophie Scamps is leading 53.9 per cent to 46.1 per cent after preferences.

Finance Minister Simon Birmingham, a leader moderate in the Liberal Party from South Australia, said the electorate had sent a message about the need for more female MPs in his party.

‘Absolutely, that’s a very important message the electorate has sent us,’ he told the ABC.

On the other side of Australia, the Liberal Party is in trouble in the wealthy Perth seat of Curtin, with sitting MP Celia Hammond struggling against independent challenger Kate Chaney, who leads 51.8 per cent to 48.2 per cent after preferences.

Ms Hammond’s primary vote had plunged 13.5 per cent as she faced a challenge from the niece of Fred Chaney, a minister in Malcolm Fraser’s government who was later the Liberal Party’s deputy leader.

Former rugby union player David Pocock is also set make history as the first-ever independent elected as a senator for the Australian Capital Territory at the expense of conservative Liberal senator and minister Zed Seselja.

The ACT has only ever chosen a Labor and Liberal senator since it was allocated two spots in 1974.

The Liberal Party also looks set to lose the leafy Brisbane seat of Ryan to the Greens with the minor party candidate leading on first preferences with 38.5 per cent of the vote, compared with 30.6 per cent for sitting member Julian Simmonds.

Since the seat was created in 1949, the Liberal Party has never lost it at a general election, only briefing losing at during a 2001 by-election. 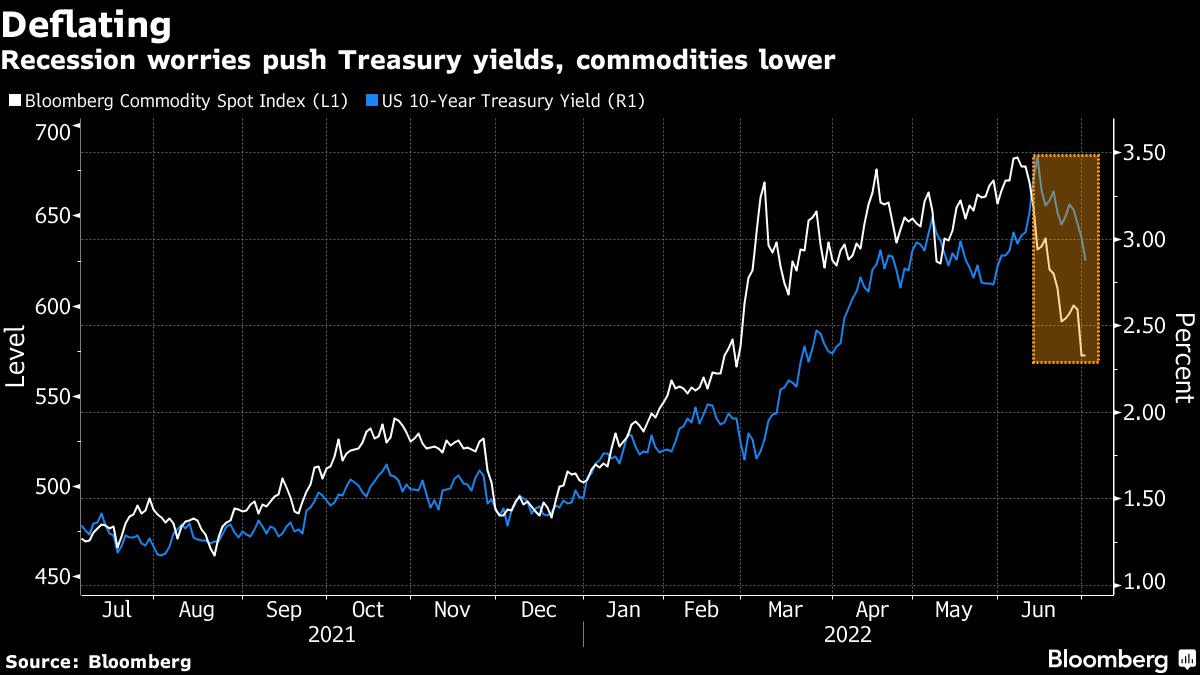